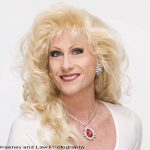 Donna Sachet started her adventure in San Francisco over 25 years ago and the City has applauded her fun-loving spirit, quick wit, and musical talent ever since.  She served as Miss Gay SF in 1992 and was elected the 30th Empress of the City in 1995. She co-chaired the SF GLAAD Media Awards for 4 years, co-hosted a cable talk show for 6 years, has served on the Boards of Directors of Positive Resource Center, LGBT Community Center, EqualityCalifornia, and the Imperial Council.  Donna was chosen as Community Grand Marshal of the SF Pride Parade in 2005 and made history in 2009 as the first drag personality to sing the National Anthem for a major league game, the SF Giants at AT&T Park.  Her Songs of the Season cabaret benefit show benefiting AIDS Emergency Fund ran for 25 years and Pride Brunch which she co-created with Gary Virginia benefiting PRC is still running 22 years later. She currently writes a bi-weekly column for The SF Bay Times and stars weekly in Sunday’s a Drag at The Starlight Room in Union Square.