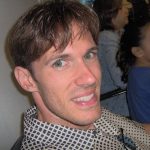 Kendall Austin Stulce has used his background in sociology throughout his 18-year career in human resources.  He is a cum laude graduate of Arkansas State University, attended graduate school at Southern Illinois University, and is starting the Master of Science in Human Resource Management at Golden Gate University in January 2014. He has worked as a human resources generalist and recruiter for Pearson Education in San Francisco since 2011, and previously worked for eleven years for Enterprise Rent-A-Car—10 of those years in human resources.  He serves as the Chairperson of the Scholarship Committee on the Board of Directors of the San Francisco chapter of the Employers Advisory Council and volunteers for the California Employment Development Department making monthly presentations to job seekers, providing them with interview tips.  He also has served on speakers’ panels for the SF LGBT Center’s Employment Services division, representing an employer’s perspective. Kendall and his partner, Corey Stulce, moved to the Bay Area in 2008.  Excited by the recent Supreme Court decision, Kendall and Corey plan to get married in San Francisco during 2014.