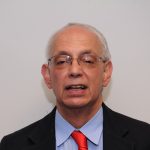 Gustavo Seriñá is President of the Castro/Upper Market Community Benefit District and a long-time resident of the Castro neighborhood. He was the first openly gay President of the San Francisco Commission on Aging and Adult Services and is currently its Vice President.  He also is a past President of the Eureka Valley Promotion Association (now The Eureka Valley Neighborhood Association). A retired Vice President of the Bank of America, he worked mainly at its San Francisco HQ in various positions, including SEC reporting, finance, project management, and in Chief of Staff positions for the head of Wholesale Banking Operations and for Global Finance. He is an active leader in the LGBT community, and as Tavo Amador, is a regular contributing arts writer to the Bay Area Reporter. He has a BA and MA in Early Modern European History.