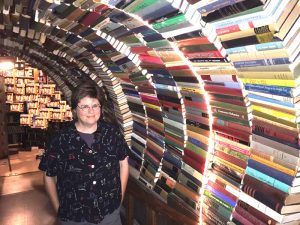 Barbara Tannenbaum is a freelance journalist and author based in San Rafael, California. She is a former magazine editor and has served as a board member with the National Lesbian and Gay Journalists Association and the UC Berkeley-based California Studies Association. Barbara has studied writing with such gay and lesbian literary pioneers as poet and author Judy Grahn and NY-based editor Michael Denneny. As an editor at SF Focus, she was privileged to work with such LGBT chroniclers as Lillian Faderman, Kim Chernin, Fenton Johnson, and Armistead Maupin. Her own nonfiction writing has appeared in the New York Times, Salon.com, the Los Angeles Times, LA Weekly, and San Francisco Magazine. Her first piece of fiction was published in the Catamaran Literary Reader’s 2015 Spring issue, an excerpt from her recently completed novel, “The Uncrowned Queen of Magnetic Springs.” She is married to Leah Brooks. In her free time, when she is not out hiking or walking the dog, she is visiting museums or researching history in Bay Area libraries.